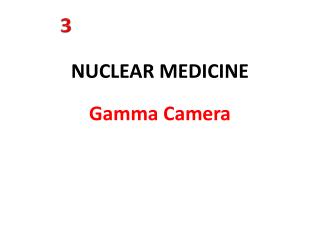 3. NUCLEAR MEDICINE. Gamma Camera. Nuclear medicine is a branch or specialty of medicine and medical imaging that uses radionuclides in the diagnosis and treatment of disease. Nuclear Medicine - . made by: sarah. what is general nuclear medicine?. medical imaging using small amounts of

Nuclear Medicine - . imaging and the treatment of cancer. gamma photons are the most energetic photons in the

Nuclear Medicine Market - The market of radiopharmaceuticals is dominated by diagnostic radioisotopes, comprising of

NUCLEAR MEDICINE TECHNOLOGIST - . debbie a. mcknight. duties. member of the administer medicine to diagnosis and treat