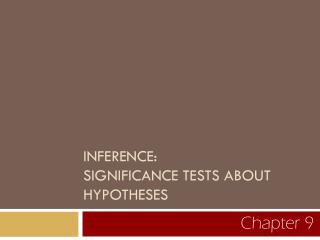 Chapter 9: Statistical Inference: Significance Tests About Hypotheses - . section 9.1: what are the steps for performing

Chapter 5 - . specifying a purpose and research questions or hypotheses. key ideas. the difference between purpose

Statistics - . chapter 9: inferences based on two samples: confidence intervals and tests of hypotheses. where we’ve

0. Why Conduct an Experiment? - . infer causation ensure repeatability also, determine the relationships between

GLY/MFC 137: The Dinosaurs - . scientific method. science is a way of understanding the physical universe. it is a set of