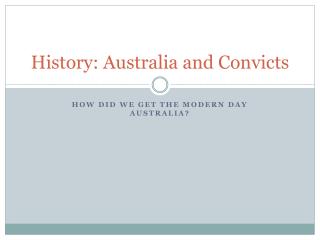 History: Australia and Convicts. How did we get the modern day Australia?. Geography. The continent of Australia, with the island state of Tasmania, is approximately equal in area to the United States (excluding Alaska and Hawaii). Asia, the Pacific &amp; the West in History - . part of the new u21 certificate in global studies dr nicki

Why Australia? - . are you looking for an international education?. do you want a quality lifestyle?. gain a life-time