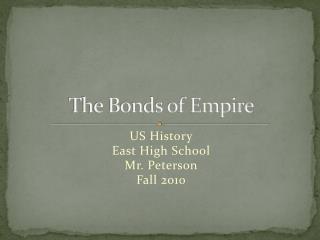 The Bonds of Empire. US History East High School Mr. Peterson Fall 2010. Focus Questions. How did the Glorious Revolution shape relations between England and its North American colonies? The Bonds of Empire - . portfolio. there will be three sections of a portfolio due during the semester. this portfolio

Severing the Bonds of Empire - . major questions. what were the causes of the american revolution? how and why did

The Bonds of Bitterness - . eph. 4:31. the bonds of bitterness. bitterness will. 1- devastate you spiritually. love.

End of the Empire - . when augustus caesar took control of rome it was the beginning of the roman empire. for the next

The Empire of Songhai - . similarities to mali and ghana. songhai was made rich through trade. they owned important salt

The summit of empire - . bell work: what was the providing theme as to how the colonies were governed by the british in

The Empire of Persia - . 10/26 10/27. objectives: explain rise of persian empire discuss accomplishments under cyrus and

The Meaning of Empire - . empire is the extension of political rule by one people over other, different peoples popular

The Rise of Empire - 1689. 1775. the rise of empire. main themes the impact of the changing technologies of war. how

The Path of Empire - . 1890 – 1899. imperialist stirrings . shift in us foreign policy move from isolationism to

The change of empire - . british rule. how did the population change at the beginning of british rule?. canadiens

The End of Empire - . ch 39. decolonization in asia. india. deep division between hindus, muslims “vivisection” of