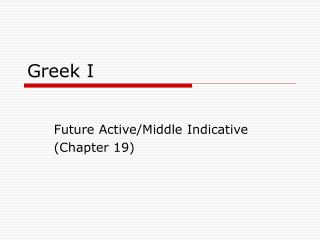 Greek I. Future Active/Middle Indicative (Chapter 19). Exegetical Insight – The Imperatival Use of the Future Tense. Both English and Greek use the future tense to predict or describe an action that will take place in future. My Greek Deities - . meaning of aphrodite. aphrodite –the greek goddess of love , beauty , and pleasure. she was said

GReEK DAY - . bulletin boards. before we went to greece we prepared a board for our students . . after we came back to

Greek, Roman, and Gothic Architecture - . the buildings that helped make up their cultures . greek architecture. most

GREEK MATHEMATICS - . introduction. the beginnings of greek mathematics originated from the 6th century bc to the 5th