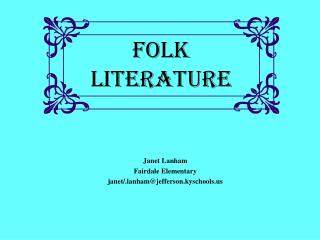 Folk Literature. Janet Lanham Fairdale Elementary janet/.lanham@jefferson.kyschools.us. Folk Tales. The Oral Tradition. Not originally written down – no known author. Handed down from generation to generation.Told over and over around the fire, at gatherings, or special occasions. Folk Literature - . language arts 1/2/2012 b2. what is folk literature?. made-up stories handed down from generation

Unit 5: Folk Literature - . epics. a people’s literature is the great textbook for real knowledge of them. the writings

Unit 1: Folk Literature - . finding ourselves. class discussion. what is art? what is the difference between good art and

Fairy Tales &amp; Folk Tales: Literature and Culture - . reading: if the world were a village by david j. smith.

Folk Healing - . objectives: identify the differences between religion and spirituality discuss the effects religion has