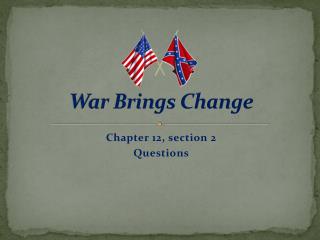 War Brings Change. Chapter 12, section 2 Questions. Question #1. Explain how the Confederate government was organized. A nswer. branches , powers similar to US govt. slavery was recognized in Confederate Constitution as well as states rights The Midwest: Technology brings Change - . the midwest is often called “the heartland” because it is the agricultural

Chapter 6 The Roman Empire Brings Change - . section 2 preview: in what ways do you think the roman empire affected

Brings... - Brings. betting... at the speed of thought. new media, new markets. betting is set to move from niche market

Europe: War and Change - A. europe. continent of europe is home to more than 40 countriesover 50 languages are spoken in

Europe: War and Change - . by: mr. hunter. september 11. how did you feel about the united states before september 11 th

War and Change WWII - . ss6h7 the student will explain conflict and change in europe to the 21 st century (ss6h7b).

The War and Social Change - . new wartime jobs offered opportunity for millions of americans, but their rapid migration

CROW BRINGS THE DAYLIGHT - . an inuit myth that explains “the land of the midnight