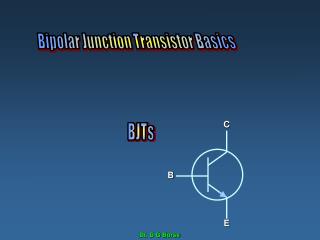 TRANSISTOR - . a transistor is a semiconductor device used to amplify and switch electronic signals and electrical power.

ME 4447 / 6405 Student Lecture “Transistors” - . brooks bryant will roby frank fearon. lecture overview. what is a

Transistor Amplifier Basics - . it is critical to understand the notation used for voltages and currents in the following