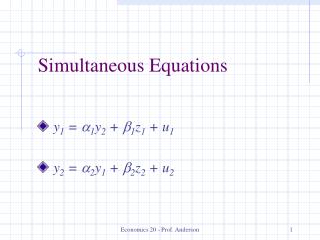 Simultaneous Equations - What are they?. simply 2 equationswith 2 unknownsusually x and yto solve the equations means we

Systems of equations - . when we have two equations with two unknowns we solve them using the methods from simultaneous

Demographics … who, what, where and when - . uk national paediatric bilateral audit. helen cullington 11 april 2013.