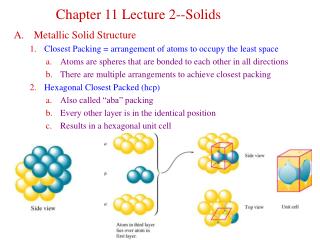 Chapter 11 Lecture 2--Solids. Metallic Solid Structure Closest Packing = arrangement of atoms to occupy the least space Atoms are spheres that are bonded to each other in all directions There are multiple arrangements to achieve closest packing Hexagonal Closest Packed (hcp) Atomic Structure - . atomic structure. all matter is composed of atoms . understanding the structure of atoms i s

STRUCTURE OF AN ATOM - . there are 108 elements in nature atoms are the smallest particle of an element that shows its

Bonding and Structure - . how atoms bond together. the bonds between atoms always involve their outer electrons. inert

CHEMICAL BONDS - . a chemical bond is formed between two atoms if the resulting arrangement of the atoms and their

CHAPTER 10 - . gases. characteristics of gases. there are three phases for all substances: solid, liquid and gases. gases

Chapter 2 Atoms &amp; Elements - . general chemistry i t. ara. a. atomic structure. although much of daltonâ€™s

Life’s Chemical Basis - . chapter 2. impacts, issues: what are you worth?. fifty-eight elements make up the human body.

States of Matter - . solids, liquids, gases, plasma, and phase changes. is there any movement within the structure of a

Plot &amp; Structure Lesson, The Destructors Plot and Analysis - . matt coyne. what are they?. plot: the sequence of