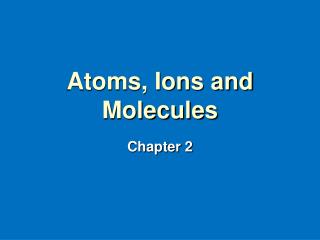 Organic and Biological Molecules - . chapter 22. organic chemistry and biochemistry. the study of carbon-containing

What Would You See if you Were On a Nucleus? - . topics for today. elements and atoms and molecules, oh boy inside the

Macromolecules - . overview: the molecules of life another level in the hierarchy of biological organization is reached