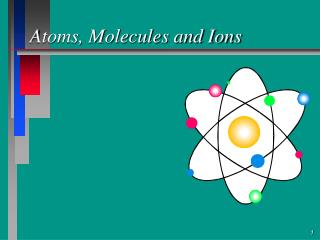 Atoms, Molecules and Ions. Atoms. Each element composed of atoms All atoms of a given element are identical Atoms of an element are not changed during a chemical reaction (the atoms just move from one chemical species to another) Compounds are formed when atoms of more than 1 element combine. STUDY OF THE EFFECT OF VARIOUS DRUGS AND IONS ON THE FROG’S HEART - . li jingxin physiologcal department. theory. ions

Chemical Bonds - . chemical bond. the interaction b/ atoms/ions that results in a decrease in potential energy of the

CHAPTER 7 - . chemical calculations 7.1-7.7. the mole. a number of atoms, ions, or molecules that is large enough to see

Chapter 7: Solutions and Colloids - . solutions solutions are homogeneous mixtures of two or more substances in which the

Atoms - Chemistry in biology. chapter 6. 6.1 atoms, elements, and compounds. atoms. chemistry is the study of matter.

The Molecules of Life - . organic compounds. what does organic mean? no pesticides? environmentally friendly farming? in

Atoms and Ions - . discovery of atomic structure. atoms – the building blocks. all substances are made from very tiny