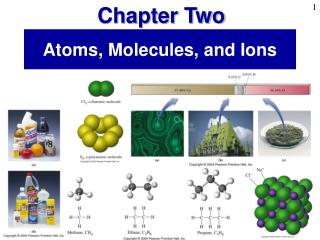 Chapter Two. Atoms, Molecules, and Ions. Laws of Chemical Combination. Law of Conservation of Mass The total mass remains constant during a chemical reaction . Law of Definite Proportions All samples of a compound have the same composition , or … Chapter 6 Intermolecular Forces of Attractions Between Particles - . intramolecular forces is the force of attraction

Chapter 2 Atoms, Molecules and Ions - . the early history of chemistry before 16 th century greeks were the first to

Atoms and Ions - . discovery of atomic structure. atoms – the building blocks. all substances are made from very tiny

Atoms and Molecules Unit 4A - . the building blocks of matter. all matter is formed by:. atoms molecules molecules are

Of Atoms, Molecules &amp; Ions I Sing - . the foundations of chemistry. atomic structure. we defined chemistry as the

Atoms, IONS and Molecules (By Sumiati )) - . objectives. 1 . the definition of atoms, molecules, and ions 2. the

I. Molecules and Ions Chemical Bonds Forces that hold atoms together - Molecules = collections of atoms that form a new

The Chemistry of Life Chapter 2-1 and 2-2 - Image from: http://www.school-for-champions.com/science/chemhydrocarbon.htm.

Chapter 2 Atoms, Molecules, and Ions - . atomic theory of matter. the theory that atoms are the fundamental building