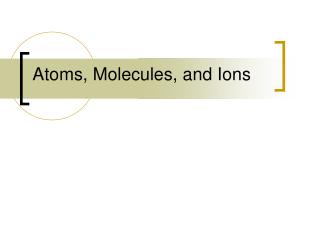 Chapter 5 Structure and Function of Large Biological Molecules - . what are the molecules of life?. because life is so

Section 3.4—Counting Molecules - . so the number of molecules affects pressure of an airbag…how do we “ count ”

The Basics - . elements, molecules, compounds, ions parts of the periodic table how to name. classification of elements.

Molecular Structure - . both atoms and molecules are quantum systems we need a method of describing molecules in a

Chemistry and Biochemistry - . med 164. william budd medical careers institute. objectives. what is an atom? what are