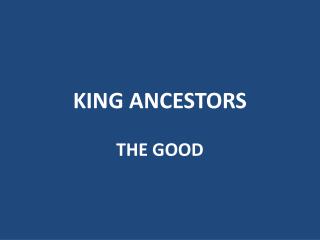 KING ANCESTORS. THE GOOD. THE GOOD. Alaric I of the Visigoths (died 410; 53 rd GGF of AE King Sr ) Sacked the city of Rome in 410, the first step of the barbarian conquest of the Roman Empire King ANCESTORS IN WESTERN EUROPE - . king ancestors in france. the connection of william the conqueror (25 th ggf of a e

Ancestors - Anasazi - may have arrived in their current location 5 to 10 thousand years ago. ancestors. hopi indians

My Ancestors - By: angelina r. class: mrs. fry. my ancestors. my dad’s side of the family. 1)what were your

Our Ancestors - . a web-quest designed by mrs. brown. our ancestors.

Our Ancestors - . a web-quest designed by sharmain brown. our ancestors.

LOWRY ANCESTORS - . the ugly. the ugly. chilperic ii of burgandy (died 493, 45 th ggf of tom lowry) killed by his brother