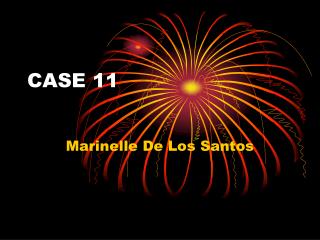 CASE 11. Marinelle De Los Santos. PJ a 4 y/o boy was playing with his friends when he suddenly vomited a large worm. History revealed nocturnal pruritus. What’s your diagnosis? What laboratory examinations will you request? How would you manage this case? Case 11 - . 55 year old female recently went to see her gp with “flu” and given a course of antibiotics but with no

Case 11 - . to treat or not to treat? ipf and preserved lung function. dr. toby maher royal brompton hospital, london and

Terrorism Case Study: September 11, 2001 - Main idea: terrorism threatens the safety of people all over the world . why