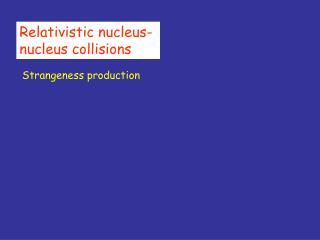 Relativistic nucleus-nucleus collisions. Strangeness production. In nuclear matter, strange (and antistrange) quarks do not exist. The production of strange particles in heavy ion collisions is then of particular interest. Nuclear Chemistry - . chapter 21. stable vs. unstable nuclei. most nuclei are stable – do not change some nuclei are

Genetics and Adaptation - . higher biology unit 2. variation. genes and inheritance shortly before a cell divides, the

Wake-up - . explain the difference between a plant cell and an animal cell. write down the summative formula for both

One of the most practical nuclear reactions results from the compound nucleus that results from A&gt;230 nuclei ab

Nuclear Chemistry - . fuuuuuusiiiiioooon ha!. the atom. nuclear chemistry revolves around the nucleus of the atom