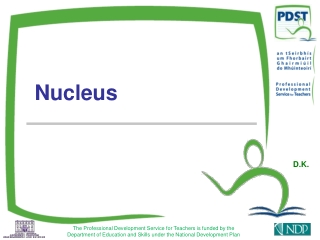 The Cell Nucleus - . the genetic material of a cell in interphase appears as dark threads. eukaryotic cells have a

Cell Structure: Nucleus, Nuclear Envelope, and the Nucleolus - . by: esteban garcia. the nucleus. function: the nucleus.

The Nucleus - . by meredith derecho, elizabeth eyermann , and hannah woolf. source 3. key facts about nuclei. “the

Introduction to C-13 NMR - . the 13 c nucleus is present in only 1.08% natural abundance. therefore, acquisition of a

The Cell Nucleus - . the evolutional significance. the formation of nucleus was an essential event in evolution.