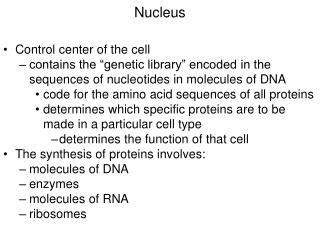 Nucleus. Control center of the cell contains the “genetic library” encoded in the sequences of nucleotides in molecules of DNA code for the amino acid sequences of all proteins determines which specific proteins are to be made in a particular cell type determines the function of that cell Nucleus - . the brain of the cell by: bryonna aldubayan. definition function significance structure and components

Nucleus - . lysosomes! sounds boring doesn’t it? well guess what?. they most certainly are not boring!!!. what do

Nucleus - . structure : large organelle bound by double membrane. there are pores for rna and proteins to pass through

Nucleus - . by audryanna carder. simile’s . if you think about it the nucleus is just like boss in a company because it

Nucleus - . these round structures are found floating in the cytoplasm. the nucleus is the genetic control center the