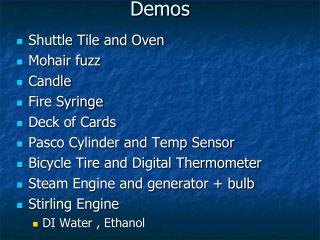 Demos - . march 2010. in this deck there are a list of available demos (pre-recorded) that demonstrate how various emc

Demos - . 10 minutes (i will beep you!) remind the class of the project interesting development issues overall design

Qualcomm Demos - . meeting of the minds. october 10, 2012. camera gestures. the swipe of your hand or a turn of your head

List of Demos - . three bulbs in a circuit power loss in transmission lines resistivity of a pencil blowing a