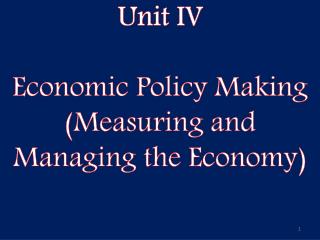 ECONOMIC POLICY - . ( or… “ how many harvard economists does it take to craft an economy policy? ”. fiscal vs.

ECONOMIC POLICY-MAKING - . understanding how our elected officials work with one another and other agencies to formulate

Unit - IV - . managing information technology. business and it. as companies are transformed into global e-businesses

Economic Policy - . now 15. american dream. a healthy economy is needed to help insure the goals of the preamble.