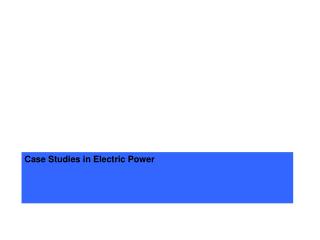 Electric Power - . power is the rate that work is done or energy is transferred , that is power = power is measured in

Electric Power - . lesson 2.5. key concepts. how do you calculate electric power? what factors are used to determine how

Case Studies in LCA - . h. scott matthews. reminders. hw #3 back can decide whether to do #4 now project pres. schedule

Case studies - By mr daniel hansson. case studies. what is a case study?. originated in clinical psychology to diagnose