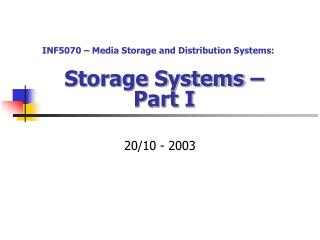 IBM System Storage – Entry and Mid Range Part 2 - . this document is for ibm and ibm business partner use only. it is

Fruit &amp; Vegetable Storage - . i. introduction proper marketing of perishable commodities such as fruits and

Part 2 Distributed Systems 2009 - . again, why are we studying distributed systems?. first, and most importantly: the

Scandinavian beds - Welcome to living storage the home of the boxer storage bed . we manufacture a range of beds with