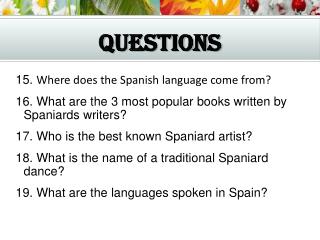 QUESTIONS. 15. Where does the Spanish language come from? 16. What are the 3 most popular books written by Spaniards writers ? 17. Who is the best known Spaniard artist? 18. What is the name of a traditional Spaniard dance? 19. What are the languages spoken in Spain? . INTRODUCTION.