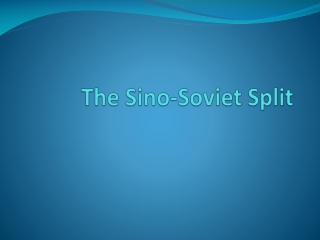 The Sino-Soviet Split. Rocky from the beginning. -Stalin felt Mao’s interpretation of Marxism, using peasants as the basis for the revolution, was not true because it wasn’t lead by workers -Stalin feared Mao as a rival for power & didn’t want the Cold War to spread to Asia The Sino-Soviet Split - . rocky from the beginning. -stalin felt mao’s interpretation of marxism, using peasants as the

Sino-Soviet Split - . objective: to understand the background and rise to the communist “ friendship ” and the

Sino- Soviet Relations - . how it went down…. background. treaty of v ersailles, shandong, given to japan. student

Korean war and Sino-Soviet alliance - . the course of events. korea was divided into two zones of occupation –soviet

THE SOVIET UNION - . chapter 29 section 4. social changes in the soviet union. what did lenin accomplish? (vladimir

The Soviet Union - . stalin i. death of lenin. in 1924 lenin died. the rule of the first communist leader was over. the

The soviet takeover - . by: nicolas llanos. background . the people are muslims, and extremely religious and