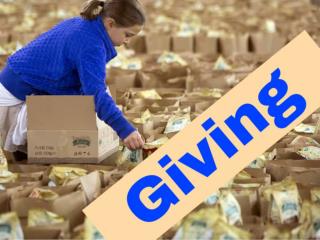 A look around the globe at people in need and the help that many have given to try to make their lives better. From donations to volunteering time, many contribute hoping to make a difference. Giving - Lesson 3. giving. hymn 1 psalm 51. create in me a clean heart, o god: and renew a right spirit within me. cast

GIVING - . what’s it all about?. the heart of the matter is…. a matter of the heart. giving is a test. the matter of

Giving - . introduction. many americans today give with the idea of receiving something material in return or think that

Giving - . characteristics of n.t. giving. regularly - first day of the week i corinthians 16:1-2 individually - i

Gift Giving - . your last gift. what was the last gift you received (money counts)? who gave it to you (parent,

Giving Games - . february 11, 2014. presented by jon behar director of philanthropy education at the life you can save.