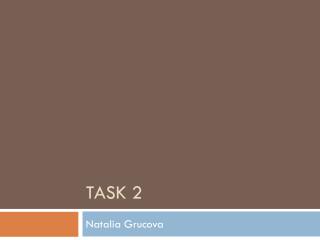 Task 2. Natalia Grucova. Class Excercise. In my group ( Stevie, Dan and me) we decided to create series of characters on very random bases. We took a piece of paper, fold it three times. We took turns drawing body parts not knowing what the previous person has drawn. Task 2 - . kineilwe . preparing for employment in the media industry . passion- if you have passion in something you're

Task #2: - . in the post main library services environment, what services will be offered in the future and how will

Task 2 - . describe the importance of good housekeeping arrangements (such as cleaning down work surfaces; putting

Task 2 : Listening - . 1. a teacher used a dialogue for listening. below, she describes what she did and how well it

Task 2 Briefing - . t he design of a c omputer controlled s top watch. the technology used. based on the microcontroller

Assignment 1: Task 2 - . impressed with your presentation to year 8, the head of sixth form has asked you to put together

WED 404 Task 2 - . your powerpoint presentation should address the following five questions: 1. why have you enrolled in

TPA Task 2 Calibration - . claremont graduate university. sonja lopez. what is the role of a tpa