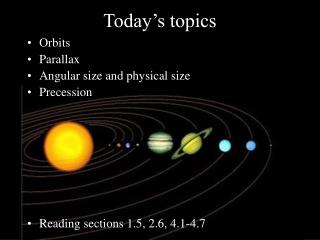 Alzheimer s Assisted Living Waiver Update - 2. today's topics. a recap on the aal waiverwhere aal is in the legislative

Topics for today - . events of the day/week igos and theories of ir un and eu study questions, nau p. 392 do you know the

Announcements - . hope you all had a good break! it’s over now the final project marathon begins! today we’re

Our Topics Today - . internet usage rates – how does the net change our daily life? why? net adoption – where are we?