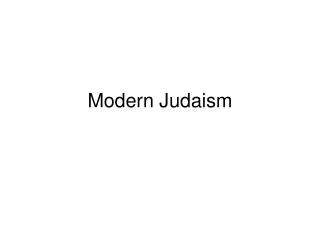 Modern Judaism - . religion of obedience to the righteous god. torah. founder of judaism. often associated with moses and

Judaism In Modern World - . anti semitism in canada and around and world zionism movement originally for re-establishment

Judaism - Was the religious foundation for christianity and islam. ... studies both could set apart cultural ideas from

Judaism - . by dane warren and johnathan clark. core beliefs in judaism. there is only one g-d. g-d isn’t composed of a

Judaism - . the term “jew” or “jewish” can refer to…. any person of jewish parentage anyone born of people who

Judaism - . judaism is one of the oldest monotheistic religions in the world – over 3500 years old. monotheistic means

Judaism - . overview. judaism began in a region known as the ancient near east over 3,500 ago. the story of the old

Judaism - . a covenant people. basic facts. not a doctrine, an idea, a faith, but a covenant between god and the people

Judaism - . “ i will make you exceedingly fruitful; and i will make nations of you, and kings shall come forth from