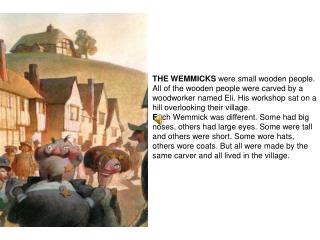 THE WEMMICKS were small wooden people. All of the wooden people were carved by a woodworker named Eli. His workshop sat on a hill overlooking their village. Portraits of conflict in Ukraine - The heavy fighting in ukraine has returned this past month, with leaders around the

ON THE FOLLY REWARDING A WHILE HOPING FOR B - . author: steven kerr presented by: robert montalvan. steven kerr. phd,

Evidence of Evolution - . chapter 11. 11.1 impacts/issues reflections of a distant past. events of the ancient past can

Chapter 22 - . reflection and refraction of light. a brief history of light. 1000 ad it was proposed that light consisted

Chapter 15 Enzyme Regulation - . outline. what factors influence enzymatic activity? what are the general features of

Shinto - . japanese archipelago. even the creation of the islands is explained through sacred shinto beliefs. meaning of