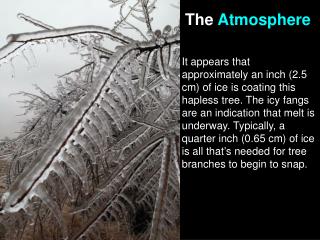 The Atmosphere. It appears that approximately an inch (2.5 cm) of ice is coating this hapless tree. The icy fangs are an indication that melt is underway. Typically, a quarter inch (0.65 cm) of ice is all that ’ s needed for tree branches to begin to snap. Stable Atmosphere - . unstable atmosphere. mixing height definition. the mixed layer can be defined as the altitude above

The Atmosphere Review - . chapter 3 water and the atmosphere. the amount of __________in the air varies greatly from

The Characterization of Atmospheric Particulate Matter - . richard f. niedziela depaul university 16 may 00. the

CREATING AN ATMOSPHERE OF RECOVERY - . what is an atmosphere of recovery? atmosphere “a particular environment or

Objectives understand differences between ocean and atmosphere that cause the ocean to be the “memory” of the - Stem.