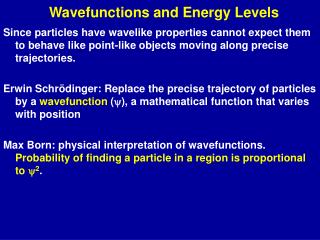 Wavefunctions and Energy Levels. Since particles have wavelike properties cannot expect them to behave like point-like objects moving along precise trajectories. Energy Levels - . electrons. nucleus . sodium at room temperature . who discovered sodium and when?. humphry davy is

Electron Configuration and Energy Levels: - . ground state: a ll the electrons in an atom have the lowest possible

Electron Energy Levels - . not all electrons in an atom have the same energy they exist in discreet energy levels these

Trophic Levels, Energy transfer and Pyramids - . trophic levels – is the position an organism occupies in a food

Energy Levels in Hydrogen - . solve se and in first order get (independent of l): can use perturbation theory to

Energy Levels, Electrons, and the Periodic table - . you need to be referring to the periodic table while reading these