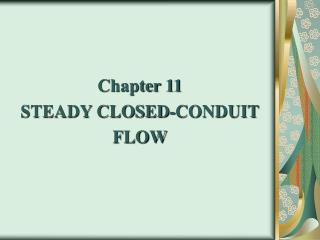 Chapter 11 STEADY CLOSED-CONDUIT FLOW. The basic procedures for solving problems in incompressible steady flow in closed conduits are presented before (in Sec. 5.8 and 5.9), where simple pipe-flow situations are discussed, including losses due to change in cross section or direction of flow. Closed Conduit Flow - The best description will be

Reversible Steady-flow Work - . some questions can be answered. why do they dump all that energy out by condensing the

CLOSED FLOW GEOMORPHIC SYSTEMS - . landscapes with wetlands often have a closed, non-integrated stream system, or at

Chapter 21 Theoretical Rates in Closed-Channel Flow - . many a time did i stand such a pipe and exert myself to invent

Chapter 3: Steady uniform flow in open channels - . learning outcomes. by the end of this lesson, students should be able

Chapter 11 Cash Flow Estimation - . capital budgeting decisions must be based on cash flows not on accounting income

Energy Consideration in Steady Flow - . lecture - 6. introduction. up till now we have studied the motion of liquid

Chapter 2: A nalysis of Steady Flow in Pipelines - . learning outcomes. to apply energy equation in pipes to analyze of