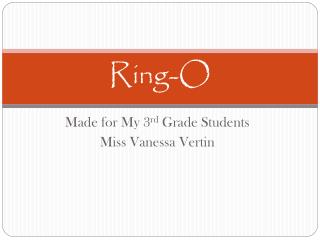 Ring-O. Made for My 3 rd Grade Students Miss Vanessa Vertin. There’s No Place Like Space!: All about Our Solar System. Ring-O - . a collection of activities based off books or songs with science/math and language arts (gardner m.i). part of

Ring-o - . a collection of activities based off books or songs with science/math and language arts. . the polar express.

Ring-O Education 356 - . a collection of activities based off of books or songs with science, math, language arts, and

Silicone Molded O-Ring - Are also called silicone seals, and custom o-rings can be referred to as molded o-rings or

Basics of O-Ring - O-ring is a loop that resembles the shape of a doughnut and is used for sealing products. it is made

RING,RING - I quit! you never wake up. i would never rob you of your sleep!. ring,ring. i’ve had a great night sleep