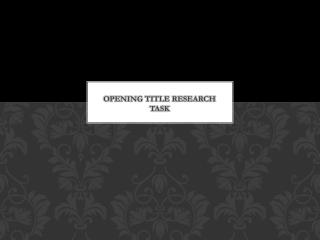 Opening Task - . on the  blackboard , write a few of your answer for #8 on the nationalism handout that is due today.

Opening Task - . identify the events you learned about in the moderate phase on the timeline that i provided to you on

Opening Task - . this cartoon (1819) says a lot about what will happen in the radical phase of the french revolution.

Opening Task - . read the poem “the man he killed” compare the message in the poem to the messages you discovered in

Opening Title Sequence - Disordered. opening title sequence. by michael, a maia and e mil. where we got our ideas from.

Day 8 Opening Task - . write down one tactic from #3 on your machiavelli guided notes 5 on the chalkboard as well as the

Day 84 Opening Task - . form a group of 5 people and report as a group to mr. biniukow. do not come and see me until you