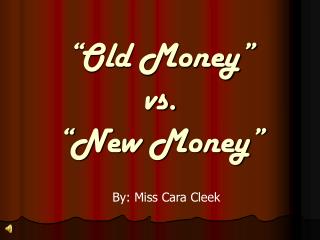 “Old Money” vs. “New Money”. By: Miss Cara Cleek. In regards to wealth, two classifications have been established. Old Money.

Money Money - Money. money: anything that functions as a means of payment (medium of exchange), unit of account, and

Money, Money, Money! - . by emily kerg. purpose: to use addition to find the value of coins when added together.

MONEY, MONEY, MONEY - . where does the money come from? the students’ union is a non-profit making charity the union