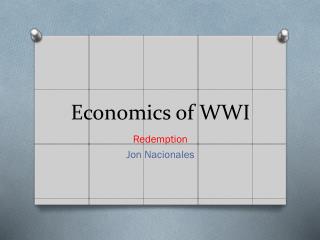 Economics of WWI. Redemption Jon Nacionales. Overview of the War. Economics of WWI - . redemption jon nacionales. overview of the

Economics of WWI and WWII - . from the following sources: the economics of wwii: an overview by mark harrison a chapter

End of WWI: Effects of WWI - . on the united states. i. end of the war. a. allies defeat germany: november, 1918 germany

Flamethrowers of WWI - . tyler jones. flamethrower history. invented in 1901 by a german engineer. first used in the war

Causes of WWI - . militarism —nations built up their militaries in order to protect their empires. alliance system

Causes of WWI - . do now: page 136. think about a fight you were in with a friend, sibling, team mate, classmate, etc.

Weapons of WWI - . by: christopher peyton. the tank. the first tank was called little willie. it was used to break trench

Innovations of WWI - . an industrialized war. weapons were produced with the same efficient methods of mass production

Warfare of WWI - . by clay hershey how did the weapons of wwi help the allies win the war?. planes of wwi. the allies had