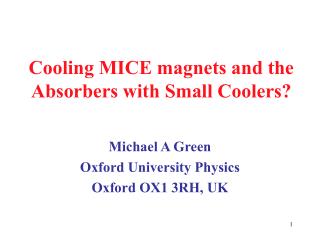 CHAPTER 8 Cooling System Operation and Diagnosis - . objectives. after studying chapter 8, the reader will be able to:

Mice and Beans - . vocabulary. a list of foods to be served at a meal. menu. noun. to go after and bring back. fetch.

Small-Scale Biodiesel Production - Energy overview where does our energy come from? 85% from fossil fuels coal, crude

Take out a piece of paper - . jot down what you know about magnets… where do we find magnets? what metals are magnetic?

Order-Tuned Vibration Absorbers for Systems with Cyclic Symmetry - . with applications to turbomachinery. motivation

Warm-up - . agree. disagree. the temperature of boiling water does not increase even though energy is supplied to it

THIS - . is. jeopardy. your. with. host. mr. steffens !. jeopardy. properties of magnets. magnets pot pouri. magnetism

Unit 5: Magnetism - . physics b. bell work. using the items at your desk, make as many observations as possible about the

Of Mice and Men - . what type of figurative language is the following excerpt?. “…with the split-wedge tracks of deer