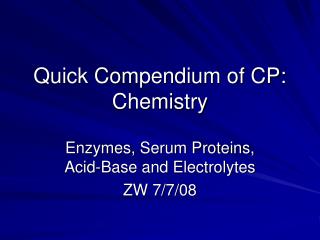 Quick Compendium of CP: Chemistry. Enzymes, Serum Proteins, Acid-Base and Electrolytes ZW 7/7/08. Enzymes: Basics. Michaelis-Menton kinetics: The rate of enzyme activity varies linearly with substrate concentration up to the point that the enzyme is fully saturated with substrate