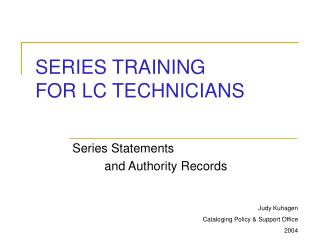 TRAINING USE ONLY - Work authorization process. training use only. “real world experience”. references.

Series Authority Control: What? Why? How? - . judith a. kuhagen cataloging policy &amp; support office library of

Series dc Circuits - . objectives. become familiar with the characteristics of a series circuit and how to solve for the

9.1 Power Series - . start with a square one unit by one unit:. 1. this is an example of an infinite series . this series