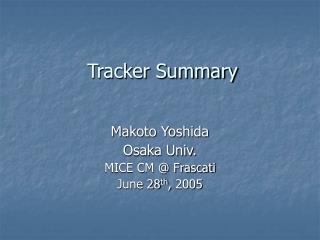 Detector Summary Tracker - . well, as far as the tracker hardware is concerned, we are done. need to do the system test

Tracker - . status. well, as far as the tracker is concerned, we are done. need to do the system test to make sure

gps tracker - Amcrest products are part of a generation of advanced remote monitoring, communication and surveillance

Tracker Goals - . main issue is to be able to run cold as more radiation is accumulated. due to “uncontrolled”

Symptom tracker - Health journal &amp; tracker trackmystack is the perfect app to use as a symptom tracker. what is a

MyPlate Tracker - . diet and exercise are hard enough to do, let alone keep track of in our busy lives. the myplate