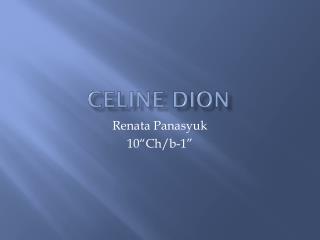 Subjects &amp; predicates - . complete subject – includes all of the words in the subject of a sentence. complete

Celine Dion sings - . and so this is christmas. so this is xmas and what have you done. another year over a new one just

Dion Abadi - Upon meeting dion abadi, it is evident that his business extends way beyond the southeastern united states.

Dion Jordan - . “the potentialist ”. dion jordan. regarded as on of the top most powerful and engaging professional

WELCOMING CELINE - . the journey was awful. exercise 1. before you watch. what was the last city you visited that was not

25 Student Athletes are surveyed 15 Play Soccer 15 Play Basketball - 5 play both basketball and soccer how can this be?

And so this is Christmas … by Celine Dion - . so this is christmas and what have you done. another year over a new one

Best of Eurovision - Highlights from the eurovision song contest 2018 in lisbon,

Biography: The Power of the Right Advisor