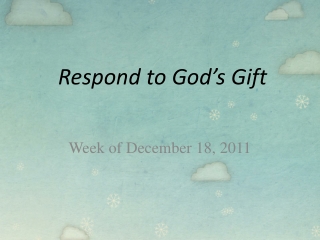 Gift of therapy - . an open letter to beginning therapists by dr. raja roy choudhury. an idiosyncratic mélange of ideas

How to Revise a Research Paper and Respond to Reviewers - . damon chandler ecen 6001, spring 2009 oklahoma state

In China’s Shadow How Americans Can Respond to Asian Competition - . reed hundt. the challenge …. china: the

EGYPT: The Gift of Nile Land of Pharaohs and Pyramids - . the nile river. fed by two tributaries: the blue nile and the

So You Want to Go Backpacking?! What About a Gift Idea? - . got your gear? know what to buy? what do you really need?.

Gift Giving - . remove the price tag before giving a gift. when possible, wrap a gift nicely. don’t ask where the gift

Respond #1 - . do you think the knight gets what he deserves? explain. recall and interpret. 2)a) what questions does the

How To Recognize and Respond to Prodromal Psychosis - . rajiv tandon university of florida. outline of presentation. why