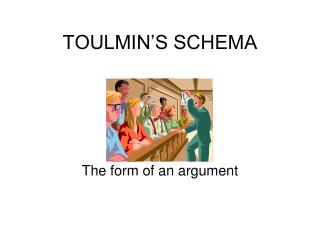 TOULMIN’S SCHEMA. The form of an argument. Who is Toulmin?. Stephen Toulmin, a British philosopher, developed a concrete system for argumentation based on sound reasoning and consideration of the opposing point of view. The Courtroom. The Toulmin Model - . “people quarrel because they do not know how to argue.” - g.k. chesterton. 1. basic model.

Toulmin Examples - . claims are debatable or controversial statements/assertions you hope to prove. evidence and reasons.

The Toulmin Model - . a tool for diagramming “informal” arguments. stephen

SCHEMA - . information that you already know that comes from your brain. setting. the time and place the story occurs;

Toulmin Argument - . definition. a structure of argument that allows for qualified claims. claim : the argument you wish

The Toulmin Model - . developed by british philosopher stephen toulmin in the uses of argument (1958). this method

TOULMIN PARAGRAPHS - . made by ms. kohanim edited and added to by ms. ulrich. should i take notes ?. stephen toulmin.

Toulmin Argument - . a powerful and practical tool for analyzing and shaping arguments. components of an argument. claim

The Toulmin Argument - . the everyday argument. components. the most basic components are: evidence warrants a claim.