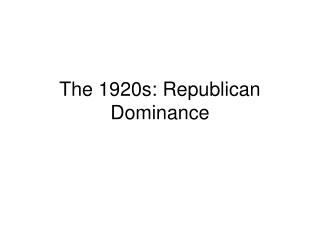 The 1920s: Republican Dominance. Guiding Question : to what extent was the individualism promoted by the Republican Presidents a guiding philosophy for them?. I. Underlying Principles. 1. The Promotion of Individualism 2. Laissez-faire Economics 3. Actively favoring corporate growth People and events of the roaring 1920s - . changes in american government and society. part i. personalities of the

Incomplete and Co-Dominance - . incomplete dominance. one allele is not completely dominant over the other. the

The New Culture - . 1920s: sections 4 and 5. objectives. trace the reasons that leisure time increased during the 1920s.

L18&amp;19:The 1920s as a Backlash to the Progressive Era - The shifting size and scope of the national government:

People and events of the roaring 1920s - . changes in american government and society. part i. personalities of the

DOMINANCE - . incomplete dominance. pattern of gene expression in which the phenotype of a heterozygous individual is

Consensus and Dominance Ad Hoc - . formed due to persistent concerns about dominance in some task groups attempts at

The Politics of Boom and Bust - . chapter 32 ap. what is meant by the “republican decade”?. the executive branch was

1920s - . a quick look at the economy. objectives. to what extent did the us economy boom during the 1920s did all parts