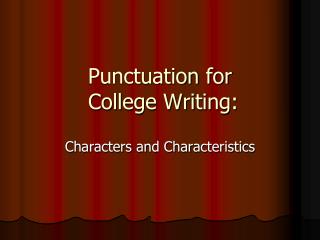 Punctuation for College Writing:. Characters and Characteristics. Goals. Learn the names and functions of English punctuation marks Practice using the marks in college-level writing contexts Ask and answer your questions Enjoy ourselves while doing the above. Punctuation . . . . AP Lit - . writing guidelines for college-level papers. when writing at the college level…. things to do. 1. you must

The TCAP Writing Assessment - . preparing students for common core writing and parcc. session objectives. the past: