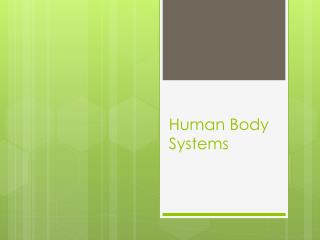 Human Body Systems. Endocrine System. Controls body functions by using chemicals that are made by the endocrine glands. Gland - a group of cells that make special chemicals for your body. Human Body Systems - . 2011-2012. maintaining homeostasis. homeostasis refers to a balance or equilibrium state in the

HUMAN BODY SYSTEMS - . why are my body systems like a set of dominos?. the human body systems all rely on one another.

Human Body Systems - Muscle power!. more than a few. the human body has more than 650 muscles. unique in its own way. no