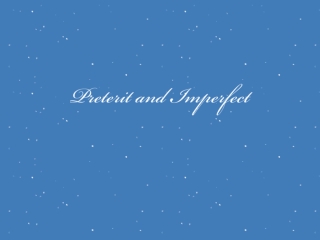 Preterit and Imperfect. Both the preterit and the imperfect are past tenses. They’re actually different ways of looking at the past. Let’s say you’re looking at a single moment in the past—for example, 12:00 yesterday. Mealtime. I can look at the moment and the action of eating in two ways: Summary of Tenses - . there are nine indicative tenses: present habla he speaks preterit habló he spoke

The preterit vs. the imperfect!!!!! - . is the action still happening in the past?. if so, imperfect. if not, preterit.

Changes in meaning in the past - . the preterit is used to talk about completed actions/events. some verbs describe

Chapter 16: Oligopoly - . imperfect market. imperfect competition is a market that is neither monopoly, or perfect

The Imperfect… take notes somewhere - . the imperfect tense is used to refer to actions in the past that occurred

Imperfect - . the imperfect, like the preterit, is a past tense. in english, we have one past tense. spanish has two.

Imperfect Subjunctive: Conjugations and Uses - . by sarah santana. introduction. the imperfect subjunctive refers to a

Preterite vs. Imperfect - . spanish 3 unidad 4.1 sra. hyman. what is the imperfect?. meaning used to do something