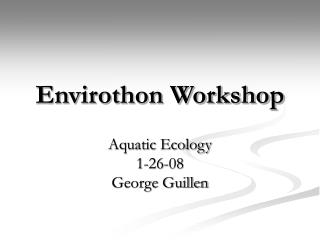 Envirothon Workshop. Aquatic Ecology 1-26-08 George Guillen. Distribution of Surface Water. WATER: Most of the surface water on the Planet located in oceans, 71% of earth covered by saltwater, 97.2% of the worlds water is in the ocean Freshwater very rare!. Water Cycle terms. Envirothon - . aquatic ecology. identify the process and phases for each part of the water cycle. water cycle terms.

FORESTRY: ENVIROTHON - . about 30% of the world is forested today, but the ratio between forest and population varies

Texas Envirothon - . environmental institute of houston. spring 2015 | texas. what is the texas envirothon?. an

Envirothon Forestry - . the educational forests are open mid march through mid november tuesday through sunday. for

ENVIROTHON SOILS STATION - . intent and purpose (you might want to sit up close for these). soil formation. landform –