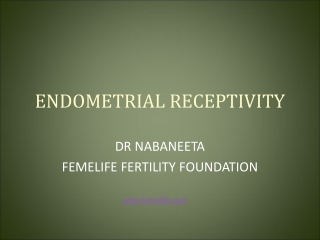 Laparoscopy versus laparotomy in the treatment of patients with early stage endometrial cancer - . claudia b.m. bijen

Reproductive System - . physiology. reproduction. reproduction can be defined as the process by which an organism

A New Approach - . how does this year’s consumer trust in the food system research take the next step in communicating